Breastfeeding after a bilateral mastectomy

Can I breastfeed after a Bilateral Mastectomy?

Yes, if you have had a breast and nipple reconstruction on at least one breast. Not only is it possible in this case, but it can be emotionally beneficial.

Although a bilateral mastectomy means that you will have no breast tissue to produce milk, there is a device called a Supplemental Nursing System that allows a mother to experience her baby latching to her breast and being fed this way.

The device is filled with formula and then attached to the breast with an outlet at the nipple.

How do I prepare for breastfeeding with an SNS? 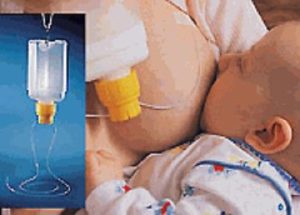 Contact your local Board Certified Lactation Consultant during pregnancy and explain that you have had a double mastectomy but would like to use a Supplemental Nursing System in order to have the experience of breastfeeding.

Your Board Certified Lactation Consultant will be able to instruct you where to obtain an SNS and how to use it correctly so that you will be able to use the device immediately after the birth. Your baby will instinctively be drawn to seek out and latch on to your nipple, regardless of your ability to breastfeed. Your consultant will also be able to guide you in choosing the correct artificial milk formula to use and how to mix it correctly, as well as the correct way to clean and sterilize the device. 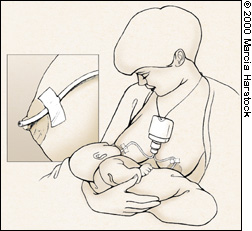 t is also advisable to include your use of an SNS in your birth plan. Most Doctors and hospital staff will be trained to promote breastfeeding and their well meaning encouragement may be upsetting for a mother who has gone through a mastectomy, whether it was done as a preventative measure in the case of BRCA or as part of treatment for breast cancer. By including details about having had a double mastectomy and your wish to use an SNS, this can help you avoid painful and repeated explanations about why you can’t breastfeed and instead help staff to focus on assisting you with the SNS.

Dealing with negativity about using a Supplemental Nursing System.

Some healthcare providers may not be supportive of your wish to breastfeed after a bilateral mastectomy and may go so far as to insist it is impossible. This is most likely because they are unfamiliar with the Supplemental Nursing System itself. However, even once being told about it they may further try to discourage you by saying it sounds complicated and cumbersome, so why bother when you have so many other new things to get to grips with already?

This is a decision only you can make, based on whether the benefits and healing that can happen as a result of experiencing breastfeeding in this way are worth the perceived “fuss” of using the SNS. Women who have used this device often report that it helps with feelings of loss after a mastectomy and also find it healing when it comes to their feelings about their body.